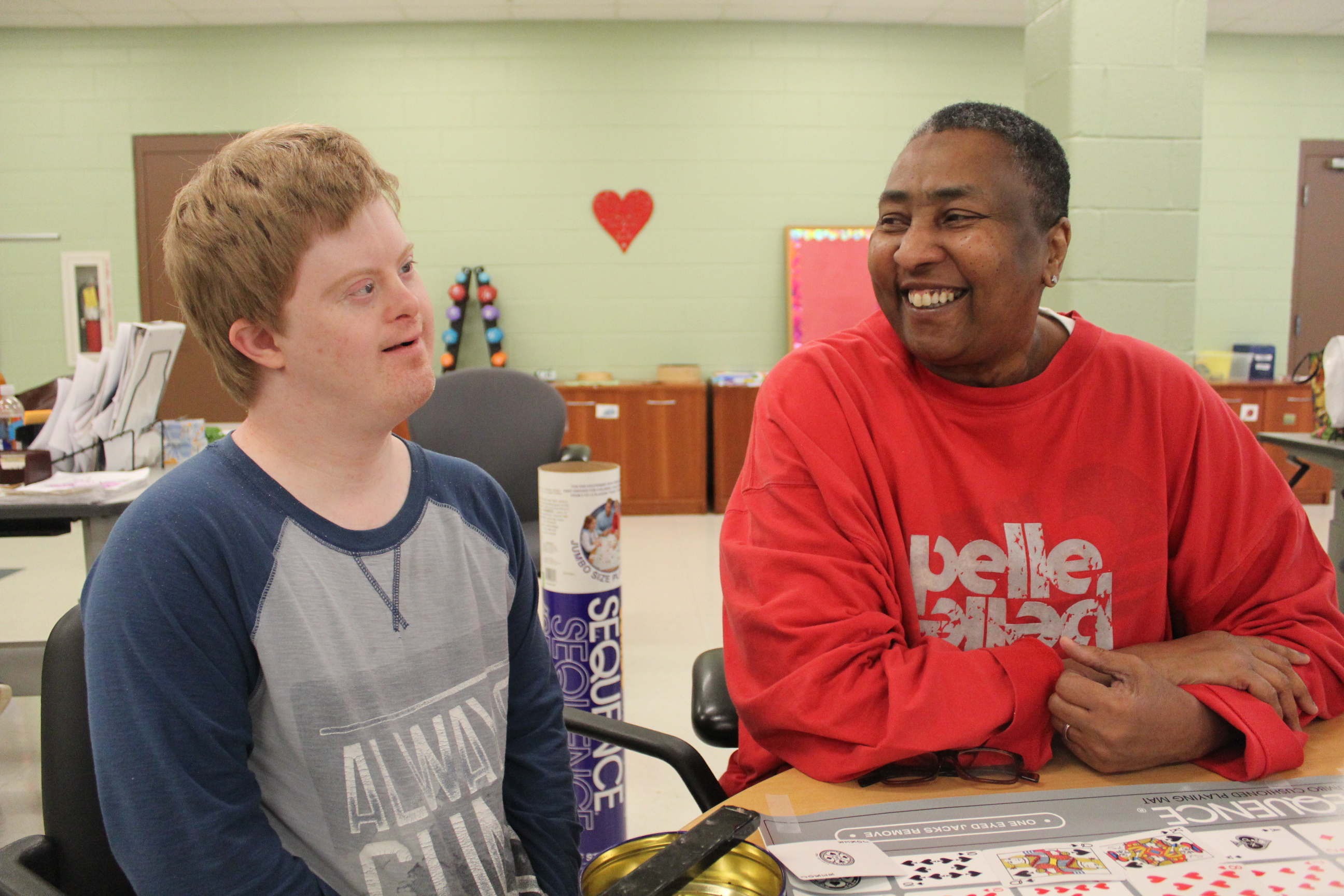 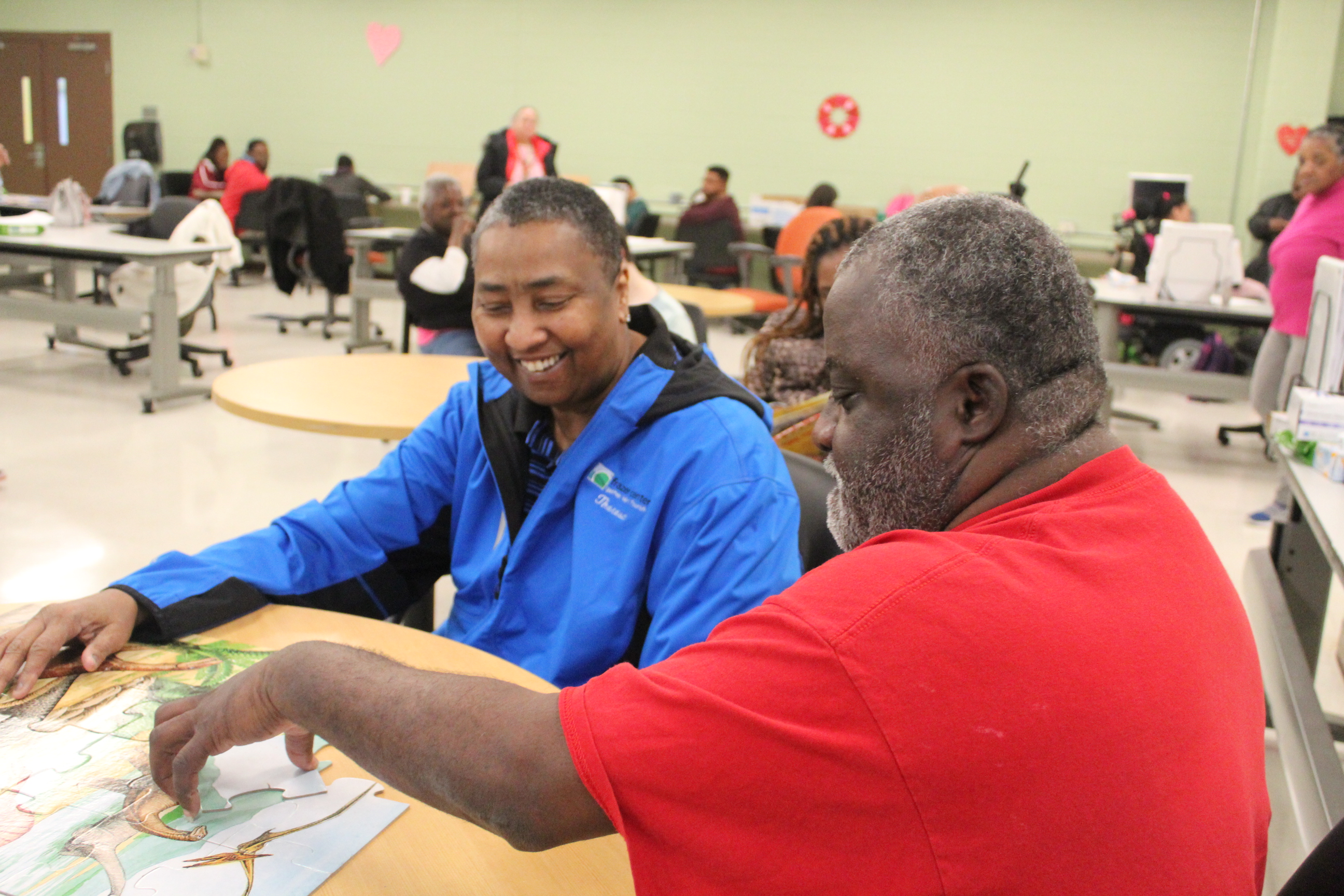 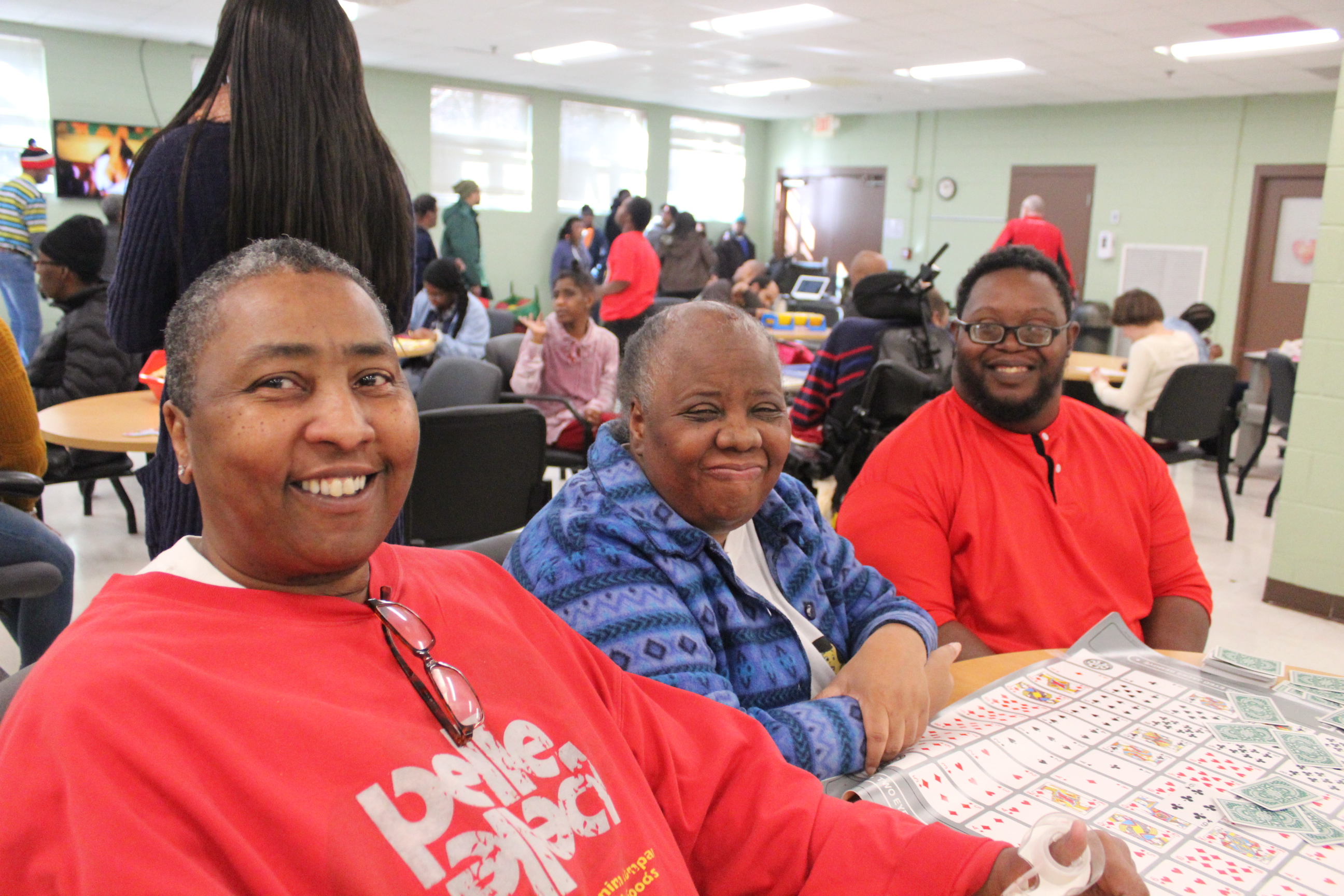 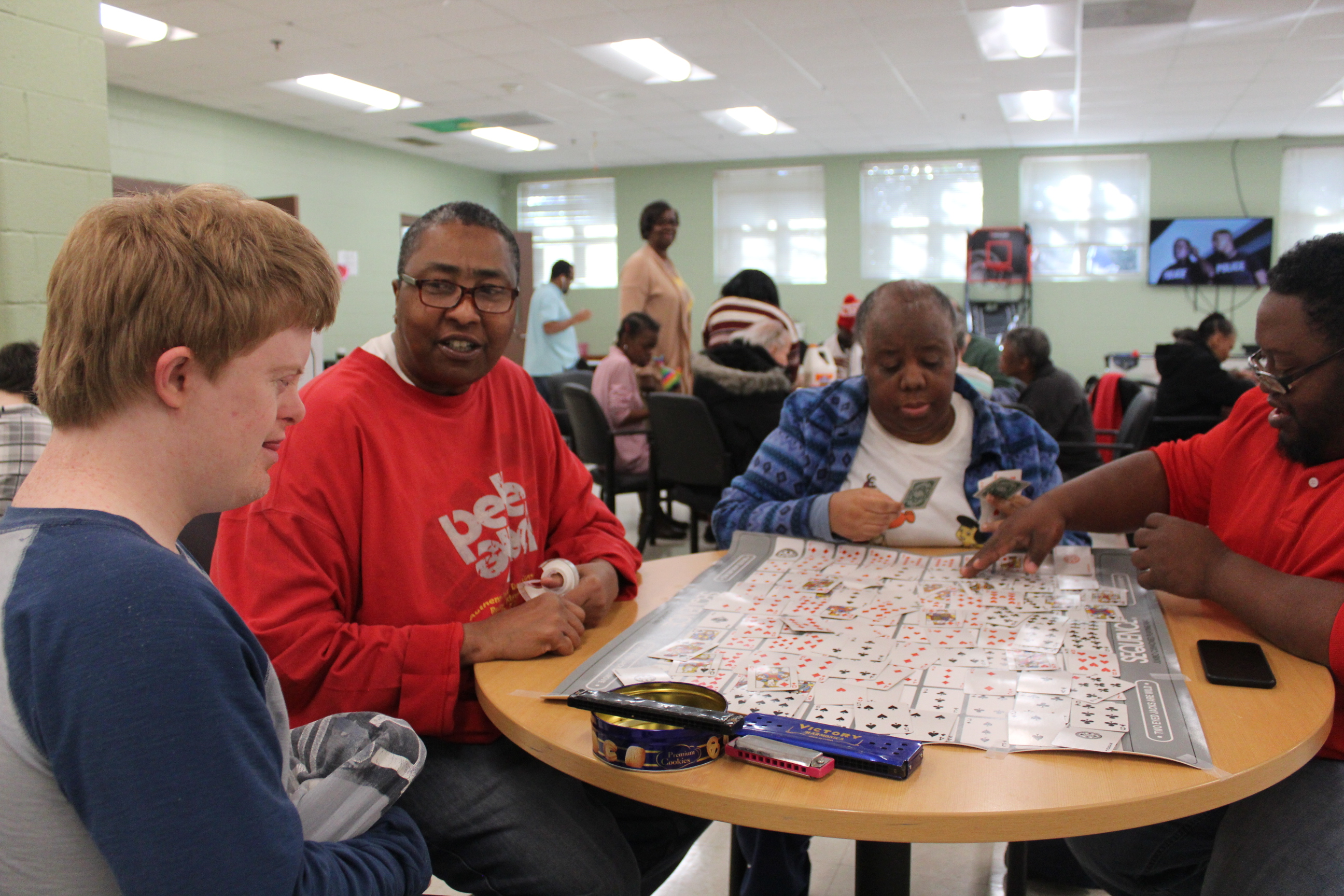 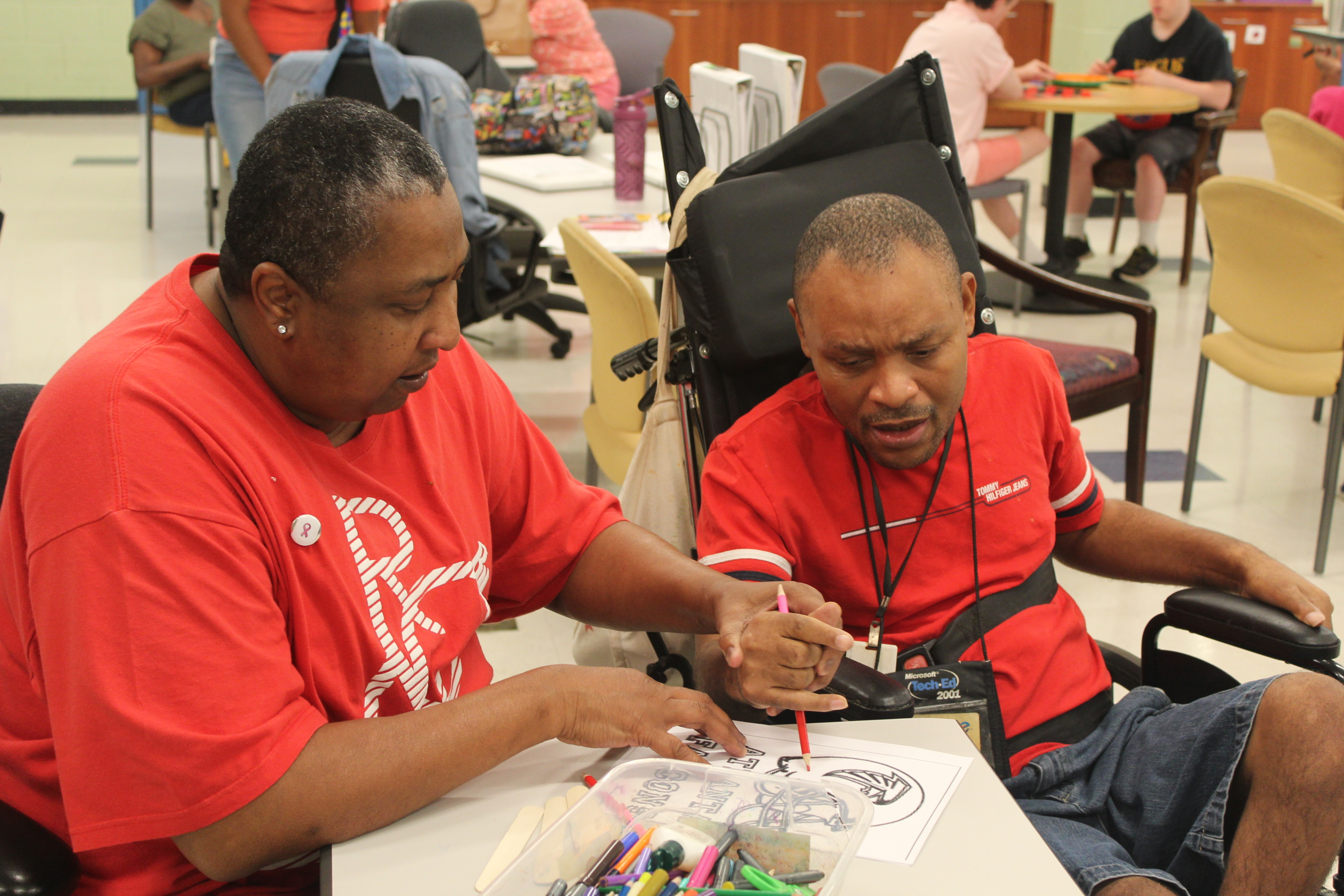 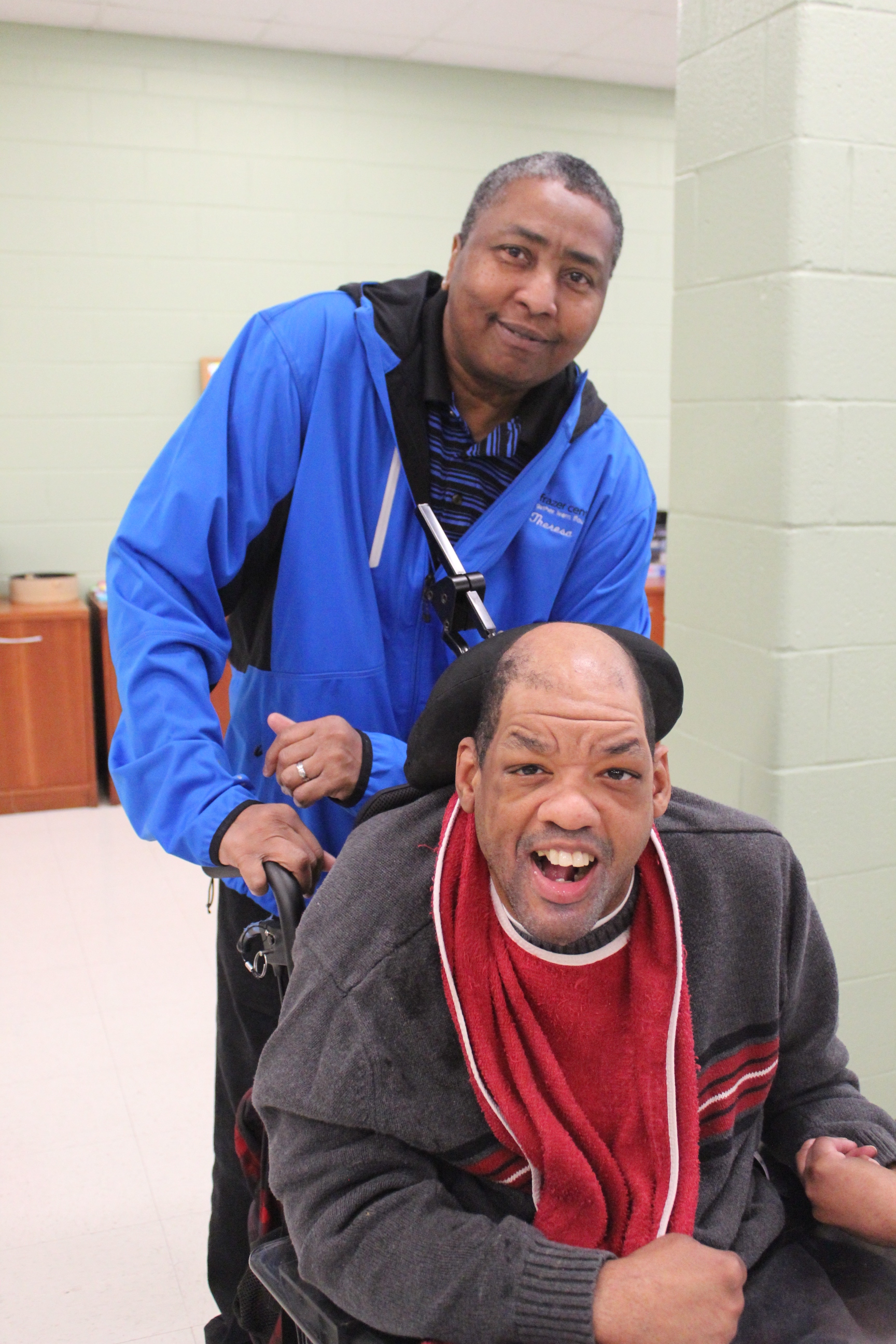 Frazer Center recently celebrated Theresa Williams on her 20th work anniversary. She’s a Direct Support Professional (DSP) in the Adult Program, but on her first day in 1999, she wasn’t sure if it was going to be a good fit. Now she can’t see herself doing anything else.

Before coming to Frazer, Theresa worked in childcare for 20 years. She spent 15 of those years at one company before it went out of business. The daughter of her former employer happened to be Frazer’s Adult Program Director at the time and thought Theresa would be good with adults with disabilities. “Come give it a try,” she suggested to Theresa. “Observe for two weeks, and if you don’t like it, we’ll see if we can find a spot for you in the children’s program.”

Theresa decided to take her up on the offer. During that two-week trial period, she realized she might have a knack for this line of work and decided to stay.

Although she didn’t have prior professional experience in the disabilities field, an experience in her youth would turn out to inform her work as a DSP. Theresa is the oldest of four girls. Her mother was a teacher and single parent. One day, when the girls were in grade school, their mother came home with a boy named JoJo who had a developmental disability. His mother, also a single parent, needed help with his after-school care, so Theresa’s mom volunteered to bring JoJo home with her for several hours every day after school.

The Williams sisters were a little reticent at first, but their mom taught them to treat him just like anyone else. Soon they began to get to know JoJo. “We’d all go to the park and play. He’d get in trouble just like we did,” Theresa laughs.

After three years, JoJo and his mother moved away. “We got so sad. We considered him a brother.” The relationship Theresa developed with JoJo, along with the compassion and acceptance she cultivated from her mother’s example, would become the foundation of her professional venture with Frazer.

Theresa’s co-workers describe her as “totally dedicated” with a great work ethic. Adult Program Assistant Director Marissa Klipp says, “Theresa works with some of the individuals who need more support, those who might seem more challenging to engage with. But she keeps them engaged.”

“Patience is a must,” says Theresa, as is “re-directing, and talking to them.” Even if an individual is non-verbal, they are still communicating. “Theresa is very observant,” says Angel White, Quality Assurance Coordinator. “She notices small things,” like subtle changes in an individual’s behavior patterns which may signal a need for support.

Theresa’s focus and caring come so naturally to her that she doesn’t even see them as skills. “I just love communicating with them. It makes me happy to see them complete their goals,” she says. “They become a part of you.”

Theresa still works with some of the same participants who were here on her very first day at Frazer. Adult Program Director Bill Payne says, “In an industry where the turnover rate is so high [45 percent according to 2017 statistics], it’s very unusual for a DSP to stay this long at one job. Theresa has been able to create consistency and lasting relationships with many of our participants. We are fortunate to have her on our team.”