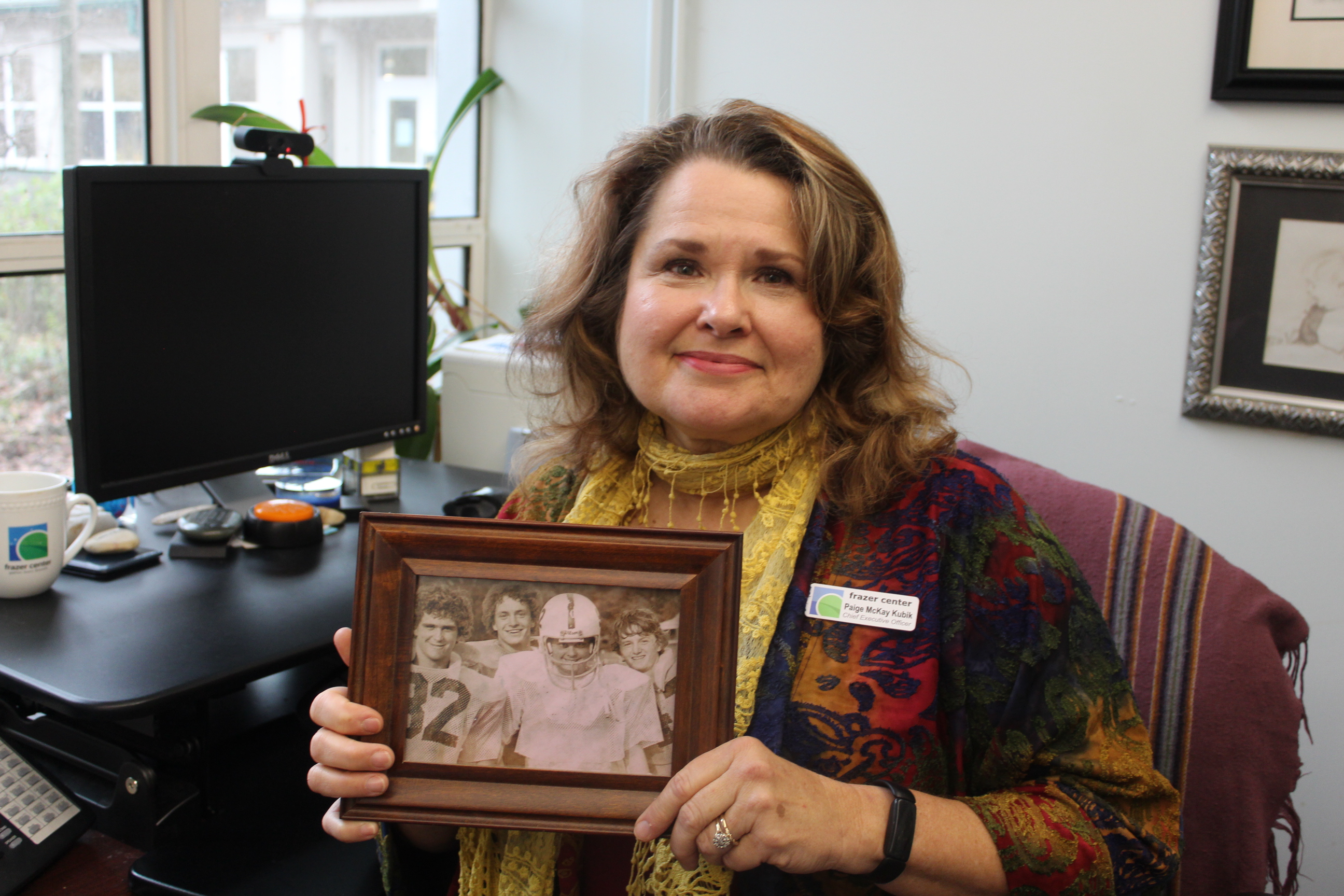 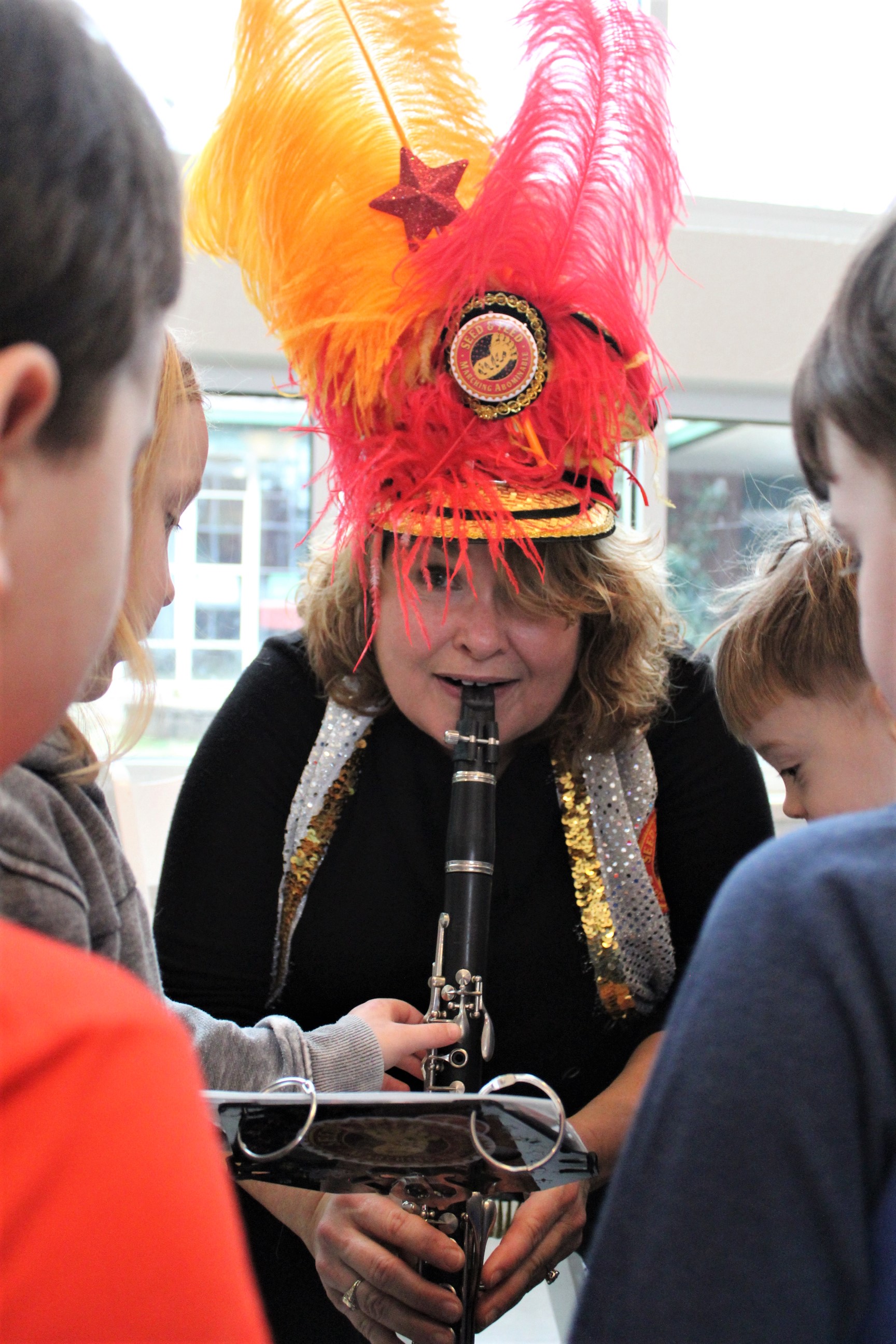 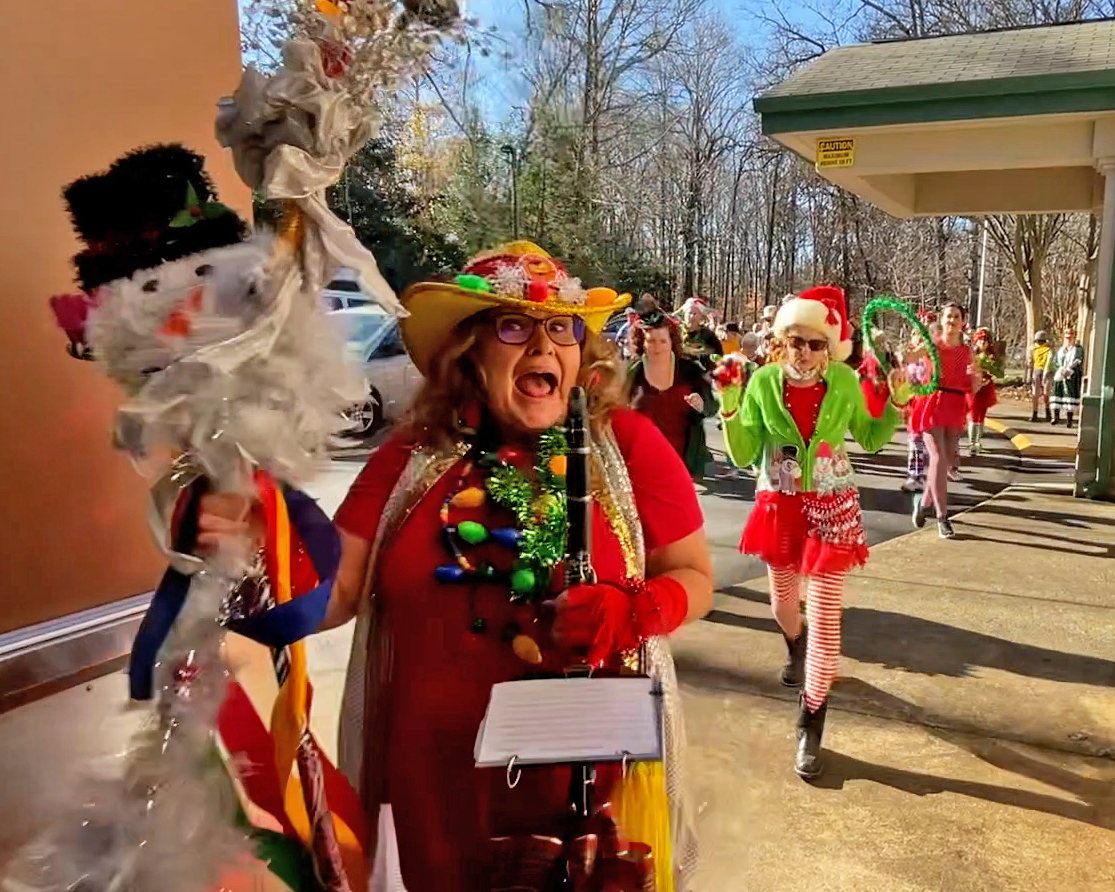 Paige with a photo of her cousin Randy (in helmet.) He was a beloved water boy for his high school football team.
Paige sharing her clarinet with some of Frazer’s children.
Paige as "Broom," leading the Seed & Feed Marching Abominables into Frazer’s Adult Services wing.

Frazer Center CEO Paige McKay Kubik comes from “a big Southern family.” For generations they have lived in Valley, Alabama, right on the Georgia border. She grew up surrounded by extended family, including her cousin, Randy.

Randy had an intellectual disability, and he “was always in the middle of everything,” says Paige. “We went to church together, birthday parties. You wouldn’t think about a reunion or gathering without Randy around. We were all part of everything together.”

As the cousins got older, some left Valley for college or work. They established homes and started families. Except for Randy. Paige sensed his sadness as his family members moved on to opportunities he didn't have. His mother wanted to protect Randy and worked to create a group home situation for him. But Randy didn't have much voice in the decisions that were being made for him.

Several family photos sit on Paige’s desk at Frazer, including some of Randy. She likes keeping him nearby as a reminder that “people with developmental disabilities should be the first voice of what happens to them and should be supported in making age-appropriate decisions for themselves.”

That is why Paige was drawn to Frazer Center’s mission of fostering inclusive communities for people with and without disabilities, and driving that mission forward is what keeps her motivated.

Paige came to the helm of Frazer Center in January of 2014. For the past nine years, she has dedicated herself to strengthening, sustaining, and expanding Frazer Center and the services we provide.

One could argue that Paige’s success as a leader began with the clarinet. She joined the band in elementary school, and before long she became drum major. While in high school she took private clarinet lessons with a teacher at Auburn University. Paige knew she wanted to go to college and major in music, and she knew she wanted to expand her horizons beyond Valley. Try as he might, her clarinet teacher could not convince her to come to Auburn, so he encouraged her to visit his alma mater, Florida State University.

She did and was hooked. Not only did she perform with the renowned FSU Marching Chiefs, but she eventually became one of its drum majors, the person in front of the band leading the way, making sure everyone is on the same beat—and keeping that team spirit up.

Paige eventually changed majors, but she kept marching with the band. And her drum major spirit lives on as she builds teams and coalitions to further Frazer’s mission.

But it wasn’t a straight line from college to Frazer. With her degree in Interpersonal Communications and three minors—Music, Women’s Studies, and Peace Studies—Paige began her professional path in the Peace Corps.

After an eight-month vetting process, she finally got an assignment. Paige spent two and a half years living in Honduras, working with the Honduran Federation of Campesina Women, a grassroots, non-governmental organization.

Paige worked with seven different women’s groups in villages in southern Honduras. But it took time to build trust and relationships with the women. Music helped break the ice. “They loved the Hokey Pokey the most! The women I worked with probably had not played since they were toddlers. To play and laugh with them broke down walls. It was amazing how much it helped them open up.”

Paige was there not as a hero but to help the groups of women “figure out priorities—more sources of income, more potable water, education for their children. We would focus on one thing to move the needle on and develop skills so they could continue doing that kind of work in their communities after I was gone.”

Once Paige left Honduras, she moved to Atlanta and began her career in the nonprofit sector, primarily within early education. She has held leadership positions with several organizations, including United Way, Our House in Decatur (as Executive Director), and the Adaptive Learning Center where she was “first exposed to early intervention services for children with developmental delays and disabilities, and how those services could be integrated into a preschool setting.”

During this time, Paige and her husband had two children who were enrolled at a new Sheltering Arms location in Chamblee. Through those connections, Paige learned about a new position within Sheltering Arms and applied for it. As the Vice President of Development and Communications, she led fundraising efforts, including capital campaigns. During her tenure there, Sheltering Arms built new centers, forged a partnership with Fulton County Public Schools, and created STEAM initiatives in collaboration with Fernbank and Woodruff Arts Center.

Once Paige’s children entered high school, she was ready to seek out another Executive Directorship.

“I had always heard about Frazer Center.” Paige had lived in Candler Park for five years and was a member of Clifton Presbyterian for fifteen years. “I loved this area. I had a lot of friends here and loved the neighborhood,” she says. “I had been on tours at Frazer and was familiar with the program.” So when the Executive Director position opened up in 2013, she jumped on it.

She had never worked professionally with adults with developmental disabilities, but her cousin Randy—and a few more family members on the autism spectrum—gave her “a real heart for this work.”

There were some organizational challenges facing Paige when she began, but in the nine years that she has been at the helm of Frazer Center, she has turned budget deficits into surpluses, nurtured goodwill among the surrounding neighborhoods, created community partnerships, and  built a leadership team that navigated the pandemic with resilience and skill, leaving Frazer in stronger financial shape than before than pandemic.

With Paige’s leadership, the Frazer Center continues to be an inclusion innovator, creating partnerships and expanding programming that can benefit not only the adult participants and children enrolled at Frazer but the community at large. Frazer’s Refugee Intern Program, for example, provides training to women who are refugees so they can become certified teachers.  In partnership with the Refugee Women’s Network, this intern program is helping Frazer fill the hiring gap that is so profound in the early education sector.

Tonja Holder, Frazer’s Vice President of Development, has known Paige since they worked together at Sheltering Arms. “In my opinion,” says Tonja, “Paige's greatest strength as a leader is hiring smart, hard-working people, giving them what they need to be successful, and then letting them do their magic.”

Part of Paige’s magic is keeping a work/life balance. For many people in the nonprofit sector, work IS life. But Paige’s drum-major spirit lives on, not only in her work at Frazer, but in her personal life. Since 2016, Paige has been a member of Atlanta’s famous Seed & Feed Marching Abominables, not only playing her clarinet but also serving as a “broom,” the moniker given to the band’s drum major.

Where she gets her energy from is part of her magic too. Along with her photo of Cousin Randy.

If you would like to contact Paige with ideas or questions about collaborating with Frazer, feel free to email her at p.kubik@frazercenter.org.